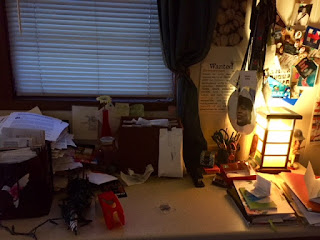 2018 is the year I question everything I have taken for granted. I’m trying to be as honest and open as possible.

Here's something I really shouldn't confess. This is my writing desk. I should take a fire hose and rinse it all away. I haven't used it as an actual writing space in years. It still functions as a work space, just not a writing space, and certainly not one that inspires. But I will take clean it off and post a picture next week.

****
I'm all FREAKED OUT about this super storm that's supposed to hit on Thursday. I'm used to lots of snow. I live in New England, after all. But the threat of high winds and snow and power outages scare me to no end.

Just before Christmas our Guinea pig passed away. Her name was S'mores and she was sweet! She stayed at a friend's house while we were out of town, but she became ill, I guess. Details are sketchy.  The kids and I took her to the vet but by then it was too late. I miss hearing the random rattling from the cage, and her penchant for snuggling close to my neck. She was 5 years old, I think. You can never be sure with Guinea pigs.

I confess, I'm happy to be sharing my secrets again. Thanks, Blog Tour, for giving me the push. When I’m in a blogging groove, it’s like telling your best friend all your secrets as soon as they happen. That’s how it was this past Sunday morning. It was early. I blogged, and wanted to write a week’s worth of posts in a few hours. I want that feeling to stick around. Maybe it’s flow. I hope.

I'm so sorry about S'mores. Creatures we live with and care for are part of the family. There is no getting around that. And one loss brings up others. Sending you open cages of love and warmth. I wish you could wait out the storm in Seattle with Kelli and me.

Look forward to seeing you in Portland, if not before!