All of those things I wanted to do yesterday ... yeah, not so much.

The day started of with a breakfast for the members of the Wompo Listserv attending AWP, 20 of us in all. Yes, Amy King is as cool in real life as she is in the virtual world. It was also nice to meet Julie Enszer and Lana Hechtman Ayers, poets I've know only through social media.


Then off to the convention center, and a terrific lunch with a few poets and headed over for the Cave Canem panel. Every time CC gets into the room, the emotions come to the surface. There's such a love and an affinity for everyone involved in this group that getting together is truly like coming home.

The panel had three fellows, Aracelis Girmay, Curtis Crisler, and Linda Susan Jackson, discussing what Cave Canem meant to them, as well as commentary by co-founders Toi Derricotte and Cornelius Eady. You couldn't sit in that room and not be moved.

The next session I attended, also in the same meeting room, was a reading for the new Fishouse anthology, From the Fishouse: An Anthology: Anthology of Poems That Sing, Rhyme, Resound, Syncopate, Alliterate and Just Plain Sound Good : 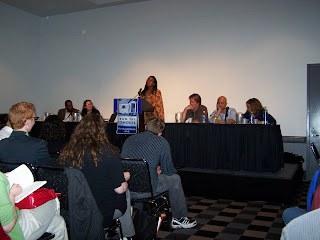 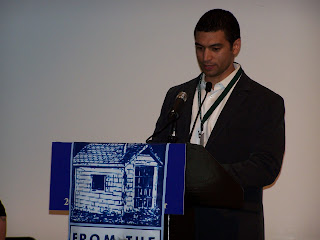 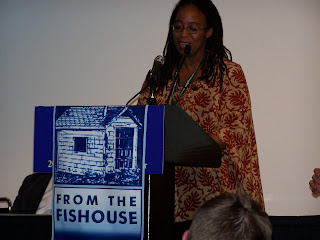 
Later, I had a chance to hear John Murillo read from his book, Up Jump the Boogie, at the Cave Canem booth. I will be reading at the CC booth today at 2:45 p.m. (Booth 405 if you're at the conference). 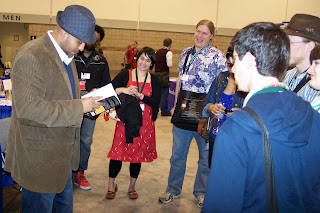 Unfortunately, I did not catch Rita Dove (sorry Evelyn), nor did I go to the receptions I wanted to attend. I ended up having dinner at a lovely French restaurant with a friend, then meeting up with more friends for drinks later. What can I say, most of these people I see only once a year. It's more valuable (and more fun) catching up with poet friends than attending sessions.

For today, if I can pull myself away from my laptop, I'm going to see Tara Betts read at the Cave Canem, float between sessions (there's not one that really captures my interest today), and load up on free or deeply discounted books from the book fair. (Many vendors don't like to ship a lot of inventory home, so they give their books away. It's cheaper than shipping them back.)

But tonight, I'm going to the reception for Brian Turner's new book Phantom Noise. Coincidentally, I ran into him in the elevator last night. Didn't say more than hi--so lame!

As for the NaPo challenge, I wrote poem 8, but I'm not posting it. It's different for me, I think I'm a little sensitive about posting it on the blog (a first!). However, I can see it being published in a journal, so I want to hold onto it. Therefore, I'm counting it as a completed work.

Catherine said…
We have a New Zealand poet Brian Turner, so it's always a bit odd for me to read about the American one :)
Good luck with the rest of the month, I've been struggling a little
11:04 PM

Mari said…
Thanks for the recap, January -- it's great for those of us who couldn't make it to AWP this year.
1:31 AM

Jessie Carty said…
really appreciate the recaps although i am a bit behind on my blog reading! looks like there was a lot more space at Denver AWP vs Chicago AWP. I'm already ready for DC!
8:08 PM

evelyn.n.alfred said…
Ha, thanks for the shout-out. I wish I could have gone to AWP. I'm glad it'll be close enough to me next year.

Thanks for sharing the details.
6:36 PM