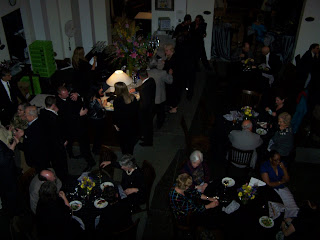 The last stop on the "Where in the World Is Jan O'Neil?" weekend tour was last night's gala, sponsored by the Brockton (Massachusetts) Public Library and the Greater Brockton Society for Poetry and the Arts (GBSPA). It was a fundraiser to support the local arts community. Great music, terrific food, and poetry--who could ask for anything more?

The event was well work trekking back from Baltimore. It's nice to see communities around the state invest the time and resources toward poetry, of all things. Brockton has a true advocate in GBSPA President Arnie Danielson. 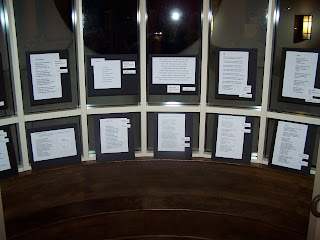 The GBSPA held their first-ever poetry contests, one for high school students, and one for New England residents. X.J. Kennedy judged the contest that had nearly 700 entrants. 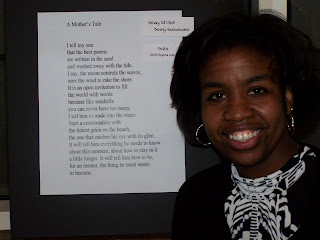 My poem, "A Mother's Tale" (a poem not in my book, Underlife) won second place! Congrats to Lori Desrosiers for her winning poem, "That Pomegranate Shine," and Dorian Kotsiopoulos for her third-place showing for "Today I Saw a Boy in a Box." And a nod to Claire Keyes, whose poem "Poem Ending in a Line by Robert Frost" was my pick to win.


I tell my son
that the best poems
are written in the sand
and washed away with the tide.
I say, the moon controls the waves,
uses the wind to rake the shore.
It is an open invitation to fill
the world with words
because like seashells
you can never have too many.
I tell him to wade into the water.
Start a conversation with
the tiniest grain on the beach,
the one that catches his eye with its glint.
It will tell him everything he needs to know
about this moment, about how to stay in it
a little longer. It will tell him how to be,
for an instant, the thing he most wants
to become.

Anonymous said…
your recent travels sound wonderful! and i've had the pleasure to meet lori in person a couple times (jill is published in naugatuck).

congrats on a great weekend!!!

(you must always be smiling, when you're not sleeping.)

January said…
Carolee, I am not writing! I have to catch up on my NaPo poems. Ugh.

Thanks for the support. I have not met Lori but I'm sure we'll run into each other soon.
8:09 PM

Catherine said…
Congratulations, it's a lovely poem!
2:23 AM

January said…
Thanks Catherine!
6:27 AM

Jessie Carty said…
congrats to you and lori :)
i met lori at AWP last year when i recorded her for shape of a box.
1:51 PM

Anonymous said…
Hi January,
It was great to meet you last
Saturday night--what a night! Congratulations again on your very moving poem. I hope to meet up with you again soon at a poetry event.
Dorian Kotsiopoulos
8:38 AM