For the second year in a row, the Massachusetts Poetry Festival was a huge success. Here's an iPhone photo of me reading with Cave Canem. Special thanks to Jarita Davis for setting up the event, and Afaa Michael Weaver for doing the introductions. 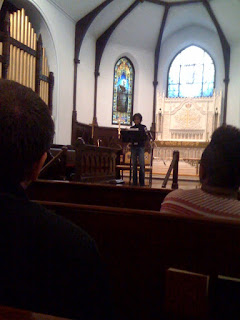 My two readings happened in the same location—a church, as you can see by the photo. My first reading with Tapsetry of Voices, a Boston-based group run by poet Harris Gardner. Read poems by Massachusetts poets, I read Elizabeth Bishop's "One Art," then followed up with villanelle and another poem of my own. Reading my villanelle after reading "One Art" just seems silly. But the audience seems to like the choice of poems. 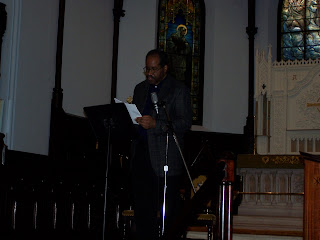 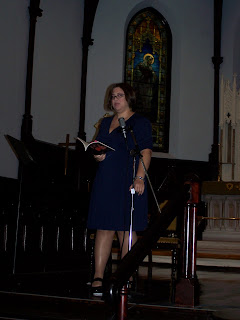 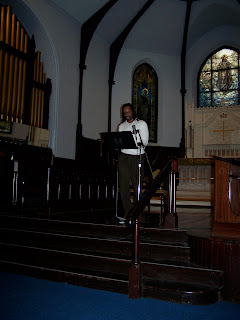 The second reading was with Cave Canem. Every time a CC event happens, the vibe changes. It's amazing and fun and supportive. Love reading with such talented writers. I was able to congratulate Jericho Brown and Tara Betts on their books in person. But it was just nice to be hear everyone's words. 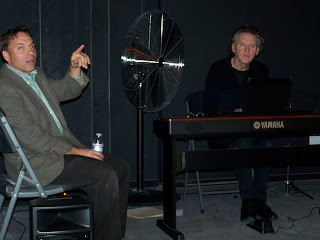 Also had the chance to hear a terrific performance of J.D. Scrimgeour's Confluence, a performance of music and poetry. He and composer/musician Philip Swanson will be releasing a CD of their work in the near future.

In the evening, I listened to Robert Pinsky and Louise Gluck reading OPP (Other People's Poetry). They were terrific. Suggestion from Pinsky: keep a collection of poems by other poets. Type out the poems and bind them together for your personal use. He says you'll learn a lot about the lines by typing them out.

Next up was Afaa Michael Weaver and Anne Waldman. Afaa was amazing, as usual. He's such a wonderful reader. His voice lifts those words off the page. After, Anne Waldman took the stage with musical accompaniment by her son. I've seen her a few times and I have to say I don't get her. I try, but I just get her. I'll leave it at that.

At the end of the evening, just as we were about to drive home, we rallied and went to the Poetry Slam. It was packed! Can't remember the last time I went to a slam but I have a feeling it was in the 90s! It was fun. Not my cup of tea but I enjoyed seeing the passion from participants.

I tend to take many more photos when I'm not responsible for reading. Took a handful of shots but not as many as I would have liked. Too bad because it was a nice day compared to the rain/sleet/snow we're experiencing now.

I have it on good authority that there will be a 2010 festival! It's my hope that I can get involved on the planning side of things. When the time comes, I will be there.

Anonymous said…
so happy to hear there'll likely be another one next year. that's wonderful!
8:27 PM

Odessa said…
sounds like you had a great time! i love pinky's suggestion, though i personally prefer to write them down instead of typing them. thanks for sharing!
2:10 AM

Kay Cooke said…
Go you! Nothing like being in the rarefied air of a celebration of all things poetry. Thanks for the report.
2:21 AM

Writer Bug said…
Love the pic of you reading with those beautiful stained glass windows in the background. Congrats!
10:56 AM

Claudia Grace said…
took the oppportunity to read for MPF's second year-both at a launch in my hometown of New Bedford and representing Southeastern Mass. in Lowell-
Cave Canem rocked! such great exposure to some new-to-me voices-
Waldman surely uniquely obscure at times, yet the Kerouac retrospective was informative...
hoping next year provides more diverse forums
2:53 PM